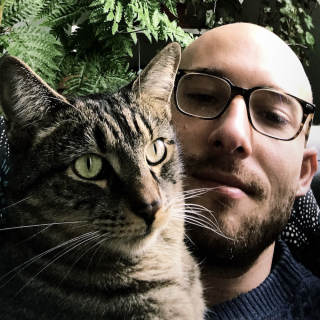 Let’s face it, there are a million DIY upholstered headboards tutorials out there. I knew I wanted one but the ubiquitous rectangular tufted style was not doing it for me. Many look crafty and elegant at best, or trendy and misshapen at worst. I realized this after having bought (and returned) Ikea’s Sultan bed, which had lots of awkward fabric creasing that I could never seem to get out.

Our bedroom already had an Art Deco vibe from this Drew Barrymore Flower Home Petal Chair. I loved the scalloping and wanted an eclectic but similarly opulent look for the bed. The room is a light steel blue and accented with cream colors. After many samples I decided to go with this beautiful Cerva Lemon fabric by Duralee (it also comes in pretty blue and orange tones).

The basic premise from most DIY tutorials you will find online applies here–build a wooden structure then attach foam and fabric with a staple gun. The more complicated part of this project is building the scalloped structure.

I built the whole thing using two large sheets of sanded plywood. The tools I needed were a circular saw, jig saw, electric staple gun, and screwdriver. The trickiest part was measuring and cutting each strip to equal a total width of 76″ (our bed is a king). It was critical to leave about 1/2 an inch on each side of every wood piece where the upholstery would take up space. For the next step I used a compass to draw a half circle on top of each strip then cut them out using a jig saw. Then I wrapped each individual strip in polyester batting and secured with a few staples on the back.

After this I started cutting the fabric. This took some planing so that the pattern did not repeat in obvious or symmetrical ways.

After cutting the fabric to the same size as each piece of batting, I pulled it tight and secured with the staple gun until all the plywood panels were wrapped. Then I used two strips of wood to secure all of the pieces together.

One of the first projects after we moved in was to build a compost bin. I took inspiration from Black and Decker’s guide but made it a bit more simple with less decorative components.

The first step was to build the main box structure. I used cedar for its pest resistant qualities and I sanded the wood as I assembled each piece.

Assembling the doors was the most challenging part of the process. The doors fit but it took a little adjusting to make sure they closed properly. After all of the hardware was assembled I painted the whole thing in shellac, which is non-toxic and won’t pass on chemical residue to the soil.

Next I added the ½” galvanized hardware cloth, leaving about a foot and a half on the bottom that I buried in ground to keep pests from trying to dig their way in (don’t skip this part, we had several intruders attempt it).

The top is where you drop food waste in, and you open the doors to turn the compost periodically! The previous owners had their own compost pile going in this same spot, so there were already worms and other bacterial processes working in our favor.

To be honest I’m still learning how to compost. My partner and I have disagreements all of the time (how many avocado skins are too many?!?). In general, I’ve found this guide from NPR really helpful.

When we moved in the garden was not in great shape. The back bed bordered with wood was rotting and full of weeds. As we dug up the weeds and carved out another bed in the front by bordering them with pavers, it was like excavating an archeological site. Tongs of toys, bricks, and stones.

I used a stamper, sand, and a level to make sure every paver was in perfectly. Once it was paved, the next step was to plant seeds! The back area would be for vegetables and herbs and the front for flowers.

I planted lots of fox gloves along the fence, wild poppies, calendula, lime green zinnia and teddy bear sunflowers. You can see some of them starting to pop up 🌱.

And here is the herb garden in progress.

See the garden later in the season in bloom here.